Perth property post-COVID: How recent pain could prove our gain

WA property has sat at the bottom of its cycle for what feels like forever. Homeowners, trapped in negative equity, have listened with rising scepticism to real estate agents’ slightly desperate-sounding promises we had definitely hit rock bottom and the tide was about to turn.

In recent pre-pandemic months it actually seemed they were about to deliver on these predictions, with prices showing signs of life for the first time in years.

Finbar announced the May launch and October construction start dates of its landmark Civic Heart towers in South Perth would be dumped, along with any other new launches.

It flagged “marked impact on confidence and sales activity on the Perth, national and global markets for some time” and “the likelihood of deferred decision-making by property customers”. 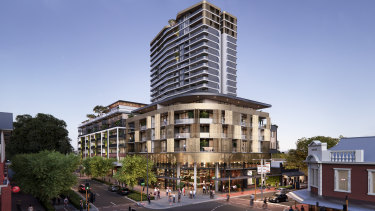 But with WA having flattened the curve, it seems the market’s formerly underwhelming position, plus a large slice of the population having little to do but sit at home planning ways to spend money, have combined to justify optimism.

Planning and property consulting firm Urbis keeps tabs on the city’s major projects, and director David Cresp said while social distancing had slowed down construction on some sites, it was in most cases still proceeding.

For projects already launched, pre-sales would continue to dictate construction start dates, and while getting presales had been more difficult, developers had a “business as usual” approach.

“Where you are seeing delays is projects that haven’t launched yet, and are choosing to delay a bit on the launching, because to launch a project means a lot of expenditure and effort that goes into marketing,” he said.

“Obviously all that is a bit less impactful in the current times.”

But given Perth’s challenging market, Mr Cresp said, many developers who had received planning approvals over the past year had been holding off on launches anyway.

Paul Blackburne, the developer behind the reimagining of the Subiaco Pavilion Markets site, said sales had flagged for a fortnight in April but had picked back up.

His company, Blackburne, had already sold 70 per cent of its Marina East-Ascot Waters development just completed this week, and had almost 100 people booked to view the remaining 19 apartments at this weekend’s opening.

Mr Blackburne said WA was the best place to be right now, being at the opposite end of the property cycle to Sydney and Melbourne.

Even with an expected price correction of around 10 per cent in Sydney and Melbourne, prices in those cities would remain almost double what they were 5-8 years ago.

By contrast, Perth prices had doubled from 2003-2007, were now back at 2007 prices and were at the beginning of their upswing stage.

At worst, median price and rent increases over the past three months might drop over winter back to where they started three months ago.

But even this might not be across the board, given Perth’s residential ‘sub-markets’.

Mr Blackburne expected prices in outer suburbs to decline in the short term by 4 per cent, before a strong rebound and 6 per cent growth over the next year.

But elsewhere there was under-supply of large, well priced, high-end apartments, and he expected modest growth over winter.

Overall, he expected Perth property prices to increase 15 per cent over the next three years, with that growth to have started by spring across the city.

“For apartments in the western suburbs, with a limited supply and increasing demand from downsizing locals, we are increasing prices at the end of May,” he said.

“Our market is mostly wealthy baby boomers who understand market cycles and that now is the time to buy.”

DevelopWise, proponent of The Sanctuary in Mount Pleasant, is also catering to this market.

The luxury development was already more than 70 per cent sold when the pandemic hit and purchasers were mainly affluent local downsizers who hadn’t been financially adversely impacted, developer John Woon said.

COVID-19 restrictions had caused a couple of months’ delay to the scheduled construction start date of April, but that was all.

“We are pleased to advise that we have submitted for Sanctuary’s building permit last week and expect to receive approval sometime this month,” Mr Woon said.

“Our builder also assured us that materials are sourced locally and they do not foresee any major construction time delays.”